Way back in ye olde 1977, a book mobile swerved to avoid a dinosaur crossing the street and collided with a semi-truck full of camera equipment. Jack Shoegazer sprouted fully-formed from the resulting toxic inferno. Since then, he has been haunted by his dual nature of writer and photographer and is ruled by his misguided attempts to unite this dichotomy. He currently lives in Madison, Wisconsin with his fiancée, Jacquelyn and his son, Ethan, who believe Jack was born in Indiana to lower-middle class blue-collar laborers. Shhhh.

I'm now in Bangor, Maine and Durham, New Hampshire simultaneously.  The fiancée is now the wife and the son has graduated and is a cook in a diner.  I'm in an MFA program for fiction.  I'm going to make a concerted effort to post here more often.

Primarily my summer writing projects have been editing and submitting stories from earlier this year and last year. Most of the markets for literary fiction are closed during the summer, so my options for submission are limited until September. Which is good if I'm trying to avoid rejection letters, like yesterday's Paris Review form letter. I send out to these long shots, knowing it's unlikely I'll get picked out of the slush pile, but it still hurts a little when the rejection comes through. I'm also making the decision to only submit to venues that pay. For some reason, literary fiction writers are expected to publish for free, for exposure, for the publishing credit, rather than get paid early in their career. Having spent enough time in the graphic design/art world, where this is also a prevalent expectation, I can assure you it's also some bullshit.

I did my first culling.  If I've accidentally defriended you, speak up so I can add you back.  LJ's friend manager is not the most user-friendly thing ever.

A friend of mine is starting a company designing and producing Japanese joinery shelving units.  Check out his Kickstarter, it's a great project and I'm a proud supporter.  The shelves are beautiful! 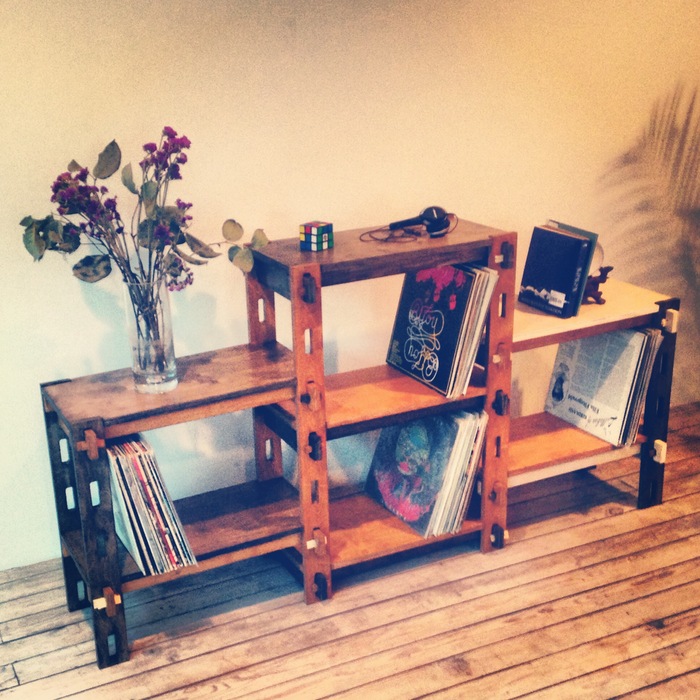 I had my first workshop of my graduate career.  It went well.  They liked my story.  A lot.  And the only issues people found were ones that I knew it had and some of them were kind of purposeful.  Which is a danger when you experiment with story structure and expectation.  I am content.  Except now I need to write another new story in the next three weeks.  Back to the drawing board, motherfuckers.

After driving taxi in Madison for six years, it's really strange living in a place where I can't answer people who stop to ask me for directions.  I still have to use Google Maps when I go for a run.

I've been getting a weird second wind right around the time I need to be going to bed.  This isn't good.

Zelda Fitzgerald's novel is really difficult to find.  I had to order a UK copy through eBay.  Sine both she and F. Scott wrote fictionalized novels about their marriage (Save Me the Waltz and Tender is the Night, respectively), I think I'll do a paper about it for my lit class. 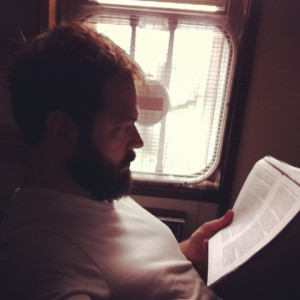 Here I am, in my dorm room, reading about the rise of confidence men and painted ladies and the disintegration of character in postbellum America.

The department here, and my advisor especially, really emphasize strong community, so my workshop has arranged a regular night-out.  I will be once again drinking with writers regularly.  I'm cool with that. 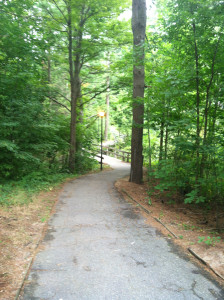 This is the walk between my dorm and the English department.  I have to walk through the woods and cross a bridge over a tiny baby ravine.  It's kind of adorable.

Well, it's a grad student dorm, so I have a room to myself, but it's a tiny cinderblock room.  It's big enough to write and sleep in, so it's really all I need.

Today was the first class of my graduate career and it was a fiction workshop.  I'll have one every semester of my two years here.  It was fine, for the first day.  We talked about Denis Johnson and having a writing career and workshops and how we should all be friends and get drunk together.  We did a little writing exercise and had to share them.  These are really good writers I'm working with, if I had to judge them solely on today.  I've got my work cut out for me (because, yes, it's a fucking contest.)

I volunteered to be in the first batch of stories that are getting read for next week.  It's a story that was a semi-finalist for the Raymond Carver Short Story Contest this year, but it's never been workshopped, so I'm throwing her in the ring.  My next story will be due October 4th and that one will have to be a new piece.

Remember when Nebraska passed that law where you could—no questions asked—abandon your child off at any hospital with no repercussions?  It was supposed to be an abortion-deterrent, a sort of post-birth control.  What they didn't realize was that they didn't set an age limit on it, so people started showing up, dropping off their teenagers.  Fourteen to seventeen year-olds, abandoned at rural hospitals.  I think I'm going to write a story from the perspective of a teenager whose mom is driving him (from several states away) to abandon him.

Or I don't know.  I'm feeling creatively dry lately.  But I have until October to figure it out, so yay?

I'm really missing Madison and my friends there.  I miss knowing a place so well.  In a way, I'm like a cat that way.  I suppose any territorial animal.  Like right now, I'm in a new, unfamiliar place and I'm barely venturing out beyond my little concrete room.  Eventually, slowly, I'll explore and continue to widen my sphere of influence, make larger and larger portions of Durham and Bangor my cave.  I'd basically turned most of southeastern Wisconsin into my cave.  I felt comfortable just about anywhere.

But here, in New England, I have to start all over.  I have a little triangle right now.  My Dorm»Dining Hall»English Department.  I'll soon expand that to include the gym.  I don't know anyone here, so I'm looking forward to getting to know (and get drunk with) my cohorts in my program.  I did it in Madison, I can do it here.

This is my building.  It houses the English department.  It's where likely all of my courses the next 24-36 months will be held.

I think this post might sound bleak but it's not all that bad.  I'm in an incredibly privileged position, I'm in a beautiful part of country, filled with both nature and some of the oldest architecture and the most history (as defined by European invaders) available in America.  It's not really that bad.  But this move has finally put a nail in the coffin of the idea that I could ever be a hermit.

I miss my people too much.  Time for new people.

I'm graduating next week. I take my last final on Wednesday. My creative writing thesis (six short stories) has already been turned in and won two awards: the University Bookstore Academic Excellence Award and the department's Eudora Welty Fiction Thesis Prize. Each prize was $1000. Feels pretty awesome, accolades. Drop me a message if you want to read the collection; I'll email the pdf to you.

It's super strange; I've been going to school for the last six years, full time for the last four. And even though I'm starting an MFA in the fall, hence more school, it's different. I'm leaving Madison. I'll have to start all over again with friends and acquaintances and colleagues and whatnot. I'm not good at those things.

And now the pressure is on. I have to keep writing at an even higher caliber. I have to keep pushing harder, grasping further, challenging myself to write more and more difficult stories. My MFA advisor said that he's more excited for my potential than anyone he's had. My current advisor thinks I'm going places. There's suddenly all these expectations.

Maybe that's sad, but it works. Go big or go home. On of my favorite writers said that unless a story frightens you, if you're not sure you've got the talent to write it, then you're not pushing yourself and it's not worth writing.

I guess we'll see because every time I sit down to write a story, I am absolutely convinced I don't have the talent to write it. But I write it anyway.

Hey kids, it is official: I've accepted a slot in the University of New Hampshire's MFA fiction program.

This was the view from my hotel balcony in Bar Harbor.

Thanks to being a poetry editor for a literary magazine, I now know that some people use Crisco as lube.
*
The only problem I have with Doctor Who is its time travel rules. They seem inconsistent and arbitrary to me. For instance, when certain characters get sent back but the angels, I don’t see why they can’t be rescued or visited again. Just because dying in that past time creates a “fixed point” doesn’t mean that all of the points in between are fixed. For an otherwise awesome show, it’s maddening. Or perhaps it’s just maddening to me since I’m a time-travel aficionado.
*
I'm going to see Wax Tailor on Wednesday.
*
When I was a kid I thought that there were a sort of finite number of souls in the world. As population grew, souls kept getting split into smaller and smaller bits so that every body got a soul. And thus soul mates are the people that have the other parts of your soul. If you were lucky, there was just the one soul split in two, but it’s more likely that you’ve got dozens of soulmates all over the world and these people are your cosmic family. I was a weird kid.

I took the GRE. I did well. Quite well. Very well. In verbal. I figured after all this time, I’d know how to read, and it turns out I do. Booyah, motherfuckers.

My quant score was decent though I don’t expect be invited to study at MIT any time soon.

While procrastinating, I found this old picture of me from 1996.

Someone on tumblr asked me "What goes on in your mind and how does it work?" to which I replied:

"The universe experiencing itself through the illusion of individuality, time, and neurotransmitters. That sentence answers both questions twice."

I feel like this has been a crazy week. An ad I designed was in Harper’s and the New York Times Book Review, I won a scholarship for spring semester, I got a raise and an offer to stay on as a freelancer after I move/graduate. I’m feeling decent about my writing again. Now, if I could just get all the rest of this semester that’s hanging over my head out of the way, I could actually enjoy my accolades.